There are two lectures worthy of your attention that are happening in Pittsburgh in the near future. The first is NPR‘s Ira Glass, creator, producer and host of popular program This American Life, which happens tonight at 7:30 at the Hillman Center for Performing Arts. The second lecture features Wu-Tang’s RZA, who was featured on this week’s City Paper cover. He’ll be appearing this Thursday at the New Hazlett Theater alongside moderator Terrance Hays, an award-winning Pittsburgh poet.

Tonight’s program, titled Reinventing Radio, will highlight Glass’ unique creative process that has contributed to his program’s widespread success. This American Life is broadcast by 500 stations nationwide and has roughly 1.7 million listeners each week. Attendees can expect behind-the-scenes commentary as Glass chronicles the show’s most memorable moments. VIP tickets are $125 and GA are $40. Purchase them here.

Thursday, April 18 finds the North Side’s New Hazlett Theater hosting an evening with RZA and Terrance Hayes, two wordsmiths with a widespread fan base and long list of accolades. Hayes is a professor of creative writing at Carnegie Mellon and on his own is fantastic, but the thought of coupling him with RZA makes us tingle a bit. This should make for some interesting and dynamic conversation. We highly suggest you look into Hayes’ work and read the feature article City Paper did with RZA to prep you for what’s in store for Thursday. There are a limited number of general admission tickets available for this event, which can be purchased here. 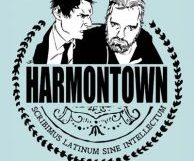