There’s only one place you should be tonight, and that’s at the Brillobox. This night of music features !!!/Modey Lemon drummer, local Paul Quattrone’s new project, Shockwave Riderz, which includes vocalist Sara McElhaney and Modey Lemon band mate Phil Boyd of TM Eye. The team of Quattrone and Boyd takes two fellas with impressive musical resumes into new territory to form a “garage-y, noisy rock n roll” feel. The trio managed to land an opening spot on a few of The Jon Spencer Blues Explosion tour dates, hitting the Rex Theater back in October. So far, the band has received a positive response, generating quite the buzz amongst supporters of local music before even releasing a single album.

Psychedelic hardcore rockers Puffy Areolas are the other band on the lineup. If their name is any indication of what to expect, we’re all in for a teet…we mean treat! Check out some jams from the band below.

Eric Yeschke, who you might remember from Quattrone’s Expensive Shit project, will be playing jams throughout the night. It all starts at 10PM and tickets can be purchased here. 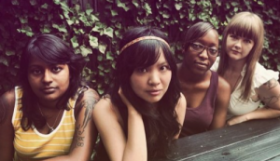