Another Movement experience is in the books for us and all our Pittsburgh family who make the trek every year. Although the lineup was very techno-heavy, the Made in Detroit stage was a standout this year in terms of what we were feelin. There were also upgrades to the VIP area and many stages that had us giving the big thumbs up to Paxahau all weekend long for a job well done. We’d like to take this opportunity to revisit some of our favorite (and not-so-favorite) moments and not-to-miss things that make Detroit the best place in the world to be every Memorial Day Weekend. Every picture below was taken by someone from Pittsburgh and shared on social media.

Although some prefer the more low key atmosphere and suite style of The Athenium, the “Ren Cen” never lets us down. Need a last minute room? No problem. But good luck finding it at 5AM when your head is fuzzy. You could get lost in here for days. Did you know the central tower is the tallest building in Michigan and the tallest all-hotel skyscraper in the Western Hemisphere? It also features the largest rooftop restaurant on this side of the world – Coach Insignia. We didn’t even know it had a rooftop restaurant until now because we’re too busy housing Slows every day.

Detroit’s Coney Island rivals are famous. Conceived in Motown, a Coney consists of chili, yellow mustard and raw onion atop a juicy dog. The intense rivalry between neighboring Lafayette and American Coney establishments runs so deep that most locals identify with an allegiance to one or the other without having ever tried the competition. This recent Detroit newspaper article profiles a bit of the rivalry’s rich history, but we’d recommend reading the book for the full story.

Made in Detroit Stage

We spent a lot of time at the Made in Detroit stage this year. From Terrence Parker to Alton Miller, Jason Kendig, Magda, Daniel Bell and our personal fave DJ Minx – this stage did not disappoint. We could have stayed here the entire three days of the festival and been 100% OK with it.

We spent a lot of time after partying at 1515 Broadway this year. Now that we know where the bars are nearby we could conveniently catch a buzz before heading in shortly after 2. Deep Detroit and No Way Back were two very different parties with very different vibes that made this spot feel new despite having been the night before. Coffee shop by day. Club by night. They’re doing something right.

Perhaps the biggest downer of the weekend was the lack of heat and shortage of sunshine on the last day. In years past, we welcomed the rain as a refreshing break from the stagnant heat, but this year it was a straight up buzz kill. We got to catch TEED and our main squeeze Nicolas Jaar before the rain got too annoying Monday and then hibernated underground for what seemed like hours. Good thing Silent Servant killed it. It was indeed so cold in the D.

Old Miami
The festival’s best kept secret, Old Miami, never fails to disappoint. This shot of barely legal Ben UFO owns. We’ll forgive them for playing a marathon of Chromeo songs inside because a Slows recently opened across the street. Just try not to get jumped on your way there. This part of town is ROUGH.

One of our friends found this random shot of us from Old Miami and it made Detroit feel just a little bit smaller aside from having our extended Pittsburgh techno family with us all weekend. The person taking this photo recognized we were going hard despite the less than ideal weather. That’s how Pittsburgh folks roll. Plus, we’re used to our fair share of shit weather.

And last but not least, the experience wouldn’t be complete without some nudity or furry boots. We managed to find it all in one place. No shame. 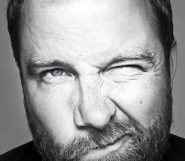