Tonight’s the night, folks! Legendary DJ/producer King Britt touches down in the PGH at none other than AVA lounge. Tickets are only $10 a pop and it’s hump day, so it would be a shame for you to miss this! The Philly-based legend has a lot of history, so let’s dive into some of it for those of you who are unacquainted. Time to get schooled.

Britt got his bearings working for Tower Records in the late eighties, becoming an in-demand buyer due to his extensive dance music knowledge. A few years later he began a residency at the now legendary Silk City in Philadelphia. It was during this time his relationship with Josh Wink was born and developed into an amicable working partnership, producing the classic and his first commercial release “Tribal Confusion”. The pair went on to found Ovum Recordings, with Britt departing in 2001. He toured as part of the Grammy-award winning group Digestible Planets and opened for Sade for multiple years. His 1998 release When the Funk Hits the Fan under the name “Sylk130” went to sell over 500,000 copies worldwide and will be re-released in 2012 as part of a box set collection for Sylk130. After his departure from Ovum in 2001, Britt went on to release an impressive body of work, none of which can be encompassed through my brief synopsis. If you aren’t familiar, hop on over to his Soundcloud to check out some of his sets.

2006 marked a shift for Britt, who shared his love of techno with the release of Interpretation under the moniker The Nova Dream Sequence. The album was praised by the likes of Carl Craig and Derrick May, who included many of the songs in their sets. 2009 saw King Britt and multimedia artists Rucyl starting Saturn Never Sleeps, an electronic improvisational group as well as a label. Saturn Never Sleeps is now a band, label and curated monthly in Philadelphia. As of late, he continues to pound out the remixes and play on occasion. This recent FACT interview profiles some of his recent projects and provides an insight into the man behind the music. He’s an avid sci-fi fan, with his favorite flick being The Fifth Element (great choice!) and he’s currently diggin’ the likes of Shabazz Palaces, Burial + Four Tet and Floating Points. Here’s to hoping he incorporates some of that into his set tonight! We’re truly excited to experience one of the world’s most revered remixers!

The show pops off tonight at 10, with an opening set by DJ Outtareach. Advance tickets can be purchased here. 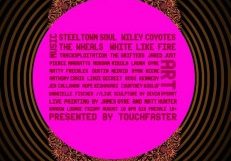