You might have noticed something called a “decentralized dance party” looming around the Facebooks for months now. While some thought it might never happen and wondered if this was actually a legit thing, the time has come to partake in what could be, dare I say, a dance party of epic proportions. Two fellas by the name of Tom and Gary put their brains and party spirits together to execute a concept that’s pretty friggin cool. What started as individual Facebook event pages with over 50,000 confirmed attendees has trickled down to an itinerary of 10 locations across the country. Cities were selected based off of which could raise the initial 1K required via Kickstarter to pull each event off. Pittsburgh has proven itself worthy amongst a group that includes places such as Austin, Chicago, Detroit and NYC, among others. Yeah, we’re sweet.

The theme of this ten city tour is “Strictly Business”. Participants are required to dress up in business attire. This is an absolute must. In addition to dressing the part, it is also highly recommended you bring a boombox. Here’s how it works: This portable, battery-powered party consists of hundreds of party people, carrying boomboxes, and a DJ who wears a backpack containing an FM radio transmitter. According to the event page, “All the boomboxes are tuned into the DJ’s master FM broadcast, resulting in a mobile, synchronized sound system. This portable dance Party roams the night, generating complete awesomeness, street by street and block by block, onto buses and subways, into public fountains and beyond. Inevitably interfacing with the public, together we create an infectious epidemic of fun. A roaming party adventure that lasts all night long!” Count me in yo!

If you want to know more about how to prepare a boombox, visit their instruction page. They’ve also recruited ten “elite” partiers in each city to assemble their Elite Banana Task Force. All ten will be equipped with banana suits in order to help prepare the boomboxes, facilitate the madness and other important party tasks. For other details on how to prepare, be sure to visit their detailed Party Manifesto. You’ll be a pro after reading it.

The pair has thrown close to 30 successful DDPs so far. The party was manifested over six short months in which attendance exploded from 20 people to 20,000 during Vancouver’s 2010 Winter Olympics. Learn more about the party’s history in the video below, and be sure to attend Thursday’s Pittsburgh edition to make history in this fine city. Final details and a starting location will be announced today via the Facebook event page.

Their ultimate goal is to “take the DDP to Every Single Country On The Face Of The Earth and inspire as many people as possible to create their own DDPs and ensure that this becomes an enduring global movement that touches as many lives as possible. Once that is complete, we will host a Simultaneous World Dance Party, transmitted to everyone in the world at the same time.” Let’s help them make this happen! 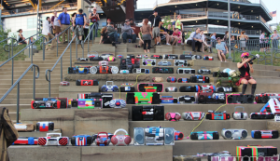