Remember this broad!? We sure do! She’s none other than Ashley Ryon, the creator of YinzerParty.com and a party throwin’ master. If you aren’t acquainted with the gal, then you might not be aware that she no longer lives in the PGH and has left us for the hip pastures of Portland. While I thought she’d be partying more than ever after the big move, she’s slowed her roll a bit to enjoy the finer things in life, like fancy dresses and delicious treats. We had a chance to catch up with her recently in preparation for her annual pudding wrestling event, which pops off this Saturday at Belvederes, and in true puddin’ fashion, should be one hell of a spectacle! I had the honor of wrasslin’ this lady during the 2nd installment of pudding wrestling, and I must say she’s a beast! I totally got my ass kicked and couldn’t move for two days. I found pudding in every crack of my body even after a shower. I wouldn’t have changed a thang! It was wild! So with out further adieu, here’s our conversation with Ashley.

Kymbo Slice: What have you been up to since the big move to Portland? Are you working on any exciting projects? Partying too much I hope!
Ashley Ryon: Actually I’m barely partying. After three years of testing my liver, party hopping and photographing most of the city, I’ve been on a pretty big break. I’ve been working in social media and exploring the incredibly amazing food the city has to offer. Every day is a new adventure in food and creative cocktails and seeing how Portlandia rings true to life. I still hope to do more street style photography in the city, but the fashion is somewhat laughable to take too seriously. YinzerParty will make an appearance during my Portland stint: Pudding Wrestling rolls in on March 23rd!

KS: What challenges have you encountered producing this year’s puddin’ event remotely?
AR: I thought the biggest problems would be finding girls and sponsors, but this year I have more of both than ever before! Luckily Facebook exists and connects me with a lot of cute, fun girls that I’ve met as acquantinces over my years in Pittsburgh. I can also thank my outgoing friends for harassing their friends to do it. We all say Pittsburgh’s very small, but every year I get a new batch of hot wrestling ladies that I’ve never met before! As for the sponsors, I’m lucky to know talented business owners in the city and happy to know that a few new shops have already heard of YinzerParty and the Pudding Massacre and were excited about being involved. I can’t flyer and poster the city like I did, but I hope stories from years past help to get the word out.

KS: What’s going to happen with YinzerParty? Is it completely done for or is there hope for the hipster population of PGH?
AR: YinzerParty transformed into a concentration on Street Style. I have a passion for style and fashion and I think it’s a fun way of expressing yourself. There’s nothing wrong with exploring nightlife street style though, so that could be where it’s headed! As for PGH, I’m all ears to someone who wants to help carry the nightly fashion torch in the 412.

KS: What do you miss most about PGH? What do you like most about living in Portland?
AR: My cat! Just kidding, I flew him to Oregon. There’s a very big difference in people on the east coast vs the west coast, specifically vs the Pacific NorthWest. It’s been a hard adjustment coming from the most friendly and welcoming city I’ve ever lived in to the city where no one really wants to get to know you. Since people make up my life more than anything else, that would be number one. Number two? Getting to walk to my favorite bars every night, I love the South Side! My favorite thing about Portland is the food. There’s good shopping, things are affordable, businesses are earth conscious, there’s a lot of live music and seeing hot hipsters my age is a regular affair, but DAMN the food is good here! Oh and the strip clubs, they’re the best in the country.

KS: If the event goes smoothly (which it totally will!) can we expect a V-day Puddin’ wrestling in 2013? What about another summer wrestling party like you did last year with cherry pie? Or is this it for you in the PGH?
AR: I don’t see an end to the Valentine’s Pudding Massacre unless it trickles down to 50 attendees – as long as I have a connection with potential girl wrestlers and businesses in the city. I love Belvederes, Keebs and everyone who’s helped from the beginning. The summer wrestling party wasn’t the banger that Valentine’s day is, probably because summer promotions are harder to do. People have too many other plans. The Pudding Massacre, whether it’s in Pittsburgh, Portland, or the next city I venture to, will be happening until I’m the one that breaks a leg or tooth in the pool.

Let’s hope that doesn’t happen this year! There have been some pretty epic injuries in years past. Speaking of, check out some photos from past years, taken by the talented Rob De La Cretaz over here. You might recognize someone in there gettin’ their toosh kicked *blushes*. And cherry pie wrasslin’ pics over here.

Also, you might remember some sick ass t-shirts that were made last year by the sick illustrator Matt Gondek. I hooked Ashley and Matt up and they’ve been making sweet puddin’ tees ever since. Only 30 will be printed this year! $15 a pop. And reserving one ahead of time with ashley@yinzerparty.com is highly recommended!

We’d also like to take the opportunity to shout out some of the event’s sponsors: Iron City Beer, MUV Integrated Fitness, Sinful Sweets Candy, Armature Tattoo Co., Boot Prints Crew and Backstage Guitars. Ashley has highlighted each of these lovely businesses on YinzerParty.com. She’s also got photos of this year’s wrestlers, so be sure to visit and pick your fave to cheer to victory! Signs highly encouraged! 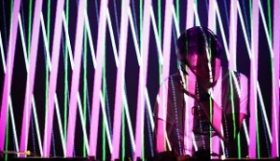