The task of interviewing Hood Gang front man and local personality Sneaky Mike has proven quite daunting given the recent coverage he’s received in both the City Paper and Post-Gazette this week. After reading both interviews, what could I possibly pull from our conversation that hasn’t already been quoted or analyzed by my fellow writer folk? Plenty.

While both articles chose to highlight Sneaky’s party persona and sensationalize an image that’s already over the top, I will dive into the man behind the gold pants, silly songs and ginger mane to expose a man of substance, intelligence and big dreams for both himself and for Pittsburgh. We spoke about everything from theoretical physics to the Dada movement to Sneaky’s time living on a commune in New York and even Beirut. Quite possibly our most interesting profile yet, I present to you, The Sneaky Mike Interview.

I entered Sneaky Mike’s very large, party-accommodating abode in Garfield on a warm January evening and was instantly whisked away into an installation that had remained there since the last party he hosted for an Unblurred gallery crawl a few months ago. As we sat down to chat, I noticed a series of three open books on the table he sat by, each of which he claims to wake up and read every morning. “I study every morning and read these three books simultaneously in order to make connections. One’s an illustrated book of every simple machine through complicated machine and how it works, one’s an illustrated book of the anatomy of every yoga pose, and I have a theoretical physics book.”

Sneaky returned to Pittsburgh in September of last year after a brief stint in New York. He lived on a commune for a while, but quickly realized it wasn’t the most conducive environment to being creative. His goal was to further his music career, but he didn’t have quite enough recorded material to land any substantial gigs. His primary means of making music was back in Pittsburgh. Feeling phased by the disappointment of his circumstances, Sneaky began doing Bikram yoga every day, which inspired him to become a Vinyasa flow teacher. “I was training yoga and ironing out a lot of things that were kind of wrong with me. I am still the same person, but with the yoga, I’m able to fix a lot of the little things that were holding me back â€“ procrastination, fear of rejection, which lead to non-productivity.”

He brought this new found sense of stability with him back to Pittsburgh after his girlfriend moved to Beirut to teach poetry. When asked about why he chose to return, he said the choice was clear. “The problem with New York is that there was everything there, a lot of cool shit, but everything seemed like it was partitioned. It was really tough to feel like you were a part of something. The scenes were like – oh ok they’re in this indie band, they’re in this noise band, there’s this one DJ who does this one type of music – there wasn’t a lot of crossover. Pittsburgh is small enough to the point where a lot of the cool shit happens around the same places. Once you start to meet people, if you’re into a lot of different things you can hop between different scenes and be accepted as long as you’re friendly.”

The vibrant and welcoming art and music community in Pittsburgh is the primary inspiration behind Sneaky’s upcoming release party this Friday at The Rex. “I consider myself a lightning rod of sorts for creative people and creative energy. I picked them (other artists on the bill) all. It was originally supposed to be everyone who did a remix on my album, which is comprised of five originals and five remixes of the “I Look Like Lil B” track. I have four of the five (Comic Strips is touring), but I still wanted more people on the bill. I added Dazzletine because they’re my favorite band in Pittsburgh right now, and Melody Joy. She seems weird and interesting so I thought she would fit. I’m trying to expose raver kids and those who just see DJs to see that there’s more potential for electronic music.”

I’ve often wondered what Sneaky does before a show to get him into optimal party spirits. The gold pants are a nice touch, but those abs take a bit more work. “I used to rely on alcohol too heavily to loosen the gears but I’m starting to see now that I can actually perform better while sober. When I first started it was scary, you know â€“ what am I doing rapping? I didn’t know what to talk about back then either. Right now (the interview) is part of the pre-performance ritual. I’m doing yoga every day. I’ll probably just do a lot of yoga poses, maybe have one beer, drink a lot of water and then just amaze everyone.” And oh, those pants. “They’re actually part of my body, I have this weird condition where my body scales up in gold lamÃ©, so I have no choice but to wear the pants. As long as I don’t have too many clothes on over top there will be gold pants shining.”

His upcoming CD release party is just one of many projects in store for Sneaky in the near future. “What I love most about live music is communicating with the audience, putting on a show, having a fun time. I don’t consider myself a musician anymore. I was calling myself a party artist for a long time, but now I’m considering myself a life artist. Some people play video games, I play life.” A solid series of five Roller Boogie parties and most recently, Space Boogie have helped put Sneaky on the party map here in Pittsburgh. “I always do try to outdo myself. By Roller Boogie 5, just skating wasn’t enough so we had to build zip lines to fly over the crowd. It’s really satisfying to give people an experience, so I always try to work hard and think outside the box to come up with crazy ideas.”

Future plans include another incredible party, of course. “I want to throw a Future Boogie. Hood Gang used to do theme shows, and I really want to throw a Bill & Ted’s Excellent Adventure show as part of Future Boogie.” Though Hood Gang is on his back burner of projects for now, Sneaky’s not slowing down any time soon. Other ideas include a collective of promoters he respects collaborating on a supplementary event to the Three Rivers Arts Festival; a music festival of sorts. He also plans on working with other musicians and producers in the city to start a new band.

What he’s most excited about, however, will develop when he goes to visit his girlfriend for five weeks in Beirut. They plan on writing a book that dives into experimenting with the notion of the writer as god, a Deus Ex Machina of sorts, surrounded by layers of fantasy and many different stories within a story in an effort to elevate the reader’s consciousness and make connections their brain otherwise couldn’t. “I want to make the world a better place. I feel the only way we can overcome the evil in the world is to somehow trigger another step of evolution in our brains. A lot of the theoretical physics I study starts to point to certain ways of that happening. I’d like to cause a revolution of consciousness, a second renaissance where we figure out ways to harness energy. We only exist in three dimensions right now and only able to process that. Scholars in theoretical physics believe there’s at least 11 dimensions, so I think there are ways to improve our world and lives and start to fix a lot of the problems. I want to oppose whoever the evil faction is that causes all the greed and problems in the world. I think the only way to do that is to somehow evoke people’s brains to start to use more of their potential.”

Sneaky is certainly living up to his potential. He recently started teaching classes at The Yoga Hive and hopes to inspire others by sharing his knowledge. “Yoga is a tool for me to make my life better and by proxy trying to make other people’s lives better. Teaching yoga is a great way to do that. People don’t just get a physical workout. I’m trying to hone their mind and make some positive mental connections that can translate into their 24 hour a day life, not just what they do on the mat. It’s part of my art too. I don’t consider myself a musician anymore. The music, the writing, whatever else, the crazy shit, the installation pieces I live in, my place is just an extension of my life art. I love music, I’ll always do music, but it’s just one aspect.”

Keep on truckin’, Sneaky, and we’ll keep waiting for your next move. Full deets on his upcoming release party can be found here. If we haven’t managed to convince you to attend at this point, I don’t know what would.

Catching Up with Sneaky Mike 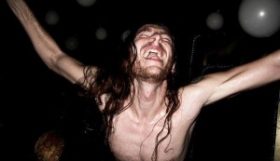