To the uninitiated, Neil Hamburger may appear to be a boozy, crass, depressed soul, hell-bent on effectively dismantling every single entity (usually obnoxious celebrities, lousy restaurant chains, and mega-corporate hucksters) that causes him even the slightest of irritations. Those who are familiar with Hamburger’s comedy would likely agree with that assessment, while giving a knowing wink that says, â€œI’m in on the joke.â€

The self titled â€œAmerica’s Funnymanâ€ Neil Hamburger is a hilariously insensitive, delightfully abrasive, mad genius of the lowest of brows. His antagonistic brand of â€œanti-comedyâ€ has earned him appearances on Jimmy Kimmel Live, Tim and Eric Awesome Show – Great Job!, and Tom Green’s House Tonight. He has released over twenty albums and EPs, including two this year: Live at Third Man and Incident in Cambridge, Mass. His current tour brings him back to Pittsburgh’s Smiling Moose on Monday, September 17th. I had the chance to talk to Hamburger – who’s quite the gentleman when he’s not on stage – about his performances, the city of Pittsburgh, road food, and recording for Jack White’s record label.

Isaac Kozell: As one of our country’s most legendary entertainers, you obviously have paparazzi chasing you everywhere you go. How do you handle the constant attention?
Neil Hamburger: You are sadly mistaken. The only people chasing me are bill collectors.

IK: Do you have a pre-show ritual?
NH: I take a silent vow to do the best that I can do.

IK: Tell me about the worst crowd you’ve ever performed for.
NH: Truthfully, there have been many that fall under that category. Recently I performed to a herd of hard-rock swine at the Reading Festival in England. Those festival slobs did not appreciate my efforts, and I was eventually removed from the stage as shoes, bottles, cans, and coins rained down all around me.

IK: How has Pittsburgh treated you when you’ve performed here in the past?
NH: Always good. We do appreciate the town’s cleanliness, and the high quality of the restaurants there.

IK: You’ve racked up countless miles traveling the roadways of America. What is the best non-chain restaurant you’ve eaten at?
NH: Just the other day, while touring with Todd Barry and Brendon Walsh, we stumbled upon a place called “Ann’s Kitchen and Taste of Thai” in Florence, South Carolina. It was the highlight of our journey. I would also mention that I have a soft spot for Pittsburgh’s own Mad Mex.

IK: Much of your Twitter account is devoted to dishing out brutally hilarious responses to posts from corporate Twitter accounts. What is your motivation?
NH: Disappointment.

IK: How do you feel about hipsters stealing your trademark look, which hasn’t changed for nearly two decades?
NH: I am not aware that such a thing is happening. But we will sue anyone, repeatedly.

IK: You owe a lot of your success to the State of California, whose programs for troubled youth saved you from what seems would have been a short, sorrow-filled life. What have you done to give back to California?
NH: I try and bring laughter to the state as many times a year as I possibly can, in as many different cities as possible.

IK: Your recent album, Live at Third Man, was recorded in Nashville and released on Jack White’s record label. What was that experience like and how has the album been received?
NH: Mr. White is a true gentleman, and it was a pleasure to work with him on what turned out to be a very popular release for me.

IK: Lastly, why did God create the internet?
NH: So that everyone will feel horrible on their deathbed, knowing they squandered away most of their life’s energy staring at a screen and doing basically nothing.

The Orwells with FIDLAR 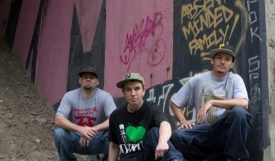