In 2008, a local band named Kalon played what would be their second to last show together at the Pepsi Roadhouse in Burgettstown during the Three Rivers Prog Rock Festival alongside bands such as Spock’s Beard, Transatlantic (featuring Mike Portnoy of Dream Theater/Liquid Tension Experiment fame), Gongzilla, California Guitar Trio, and Flower Kings. Now, four years later, Kalon finds themselves approaching the end of an era as they prepare to play their final show as a band this Saturday at Howlers in Bloomfield. Having released only one record, Dark Sky, Bright Sun back in 2006 during their nine years together as a band, they decided to call it quits earlier this year as a result of busy and increasing schedule conflicts. Their priorities had shifted and each member was entering a different stage in life, and so, despite the addition of a violaist, Rachel, in 2009 (who has yet to play an actual gig with the band), they’re bidding the band adieu as each of them concentrate on other projects and move on to the next phase. We had a chance to chat with our pal, Adam Rauf, regarding Kalon’s departure from the local music scene. Here’s what he had to say.

Kymbo Slice: Why did you decide to play one last hoorah show as Kalon?
Adam Rauf: At our January band meeting, we had flirted with the idea of doing a final recording to give out to friends and fans. It was funny; we hadn’t played in 4 years, yet people kept asking us to play shows or when they could buy our album. We decided instead to do one last gig, which we’d perform all of our newest stuff that was hiding in the background and currently not-yet performed. We also decided to play a few of our favorites from our previous catalog. Also, Rachel had just joined the band in late 2009, but had never recorded or played with us. We felt like it would be best to do a show with her, because her viola playing is awesome, and we had started composing for dual strings.
We also decided at that point that instead of trying to do our album AND playing a show, we’d just get live video and audio recordings of the material and put it up for free. People had been waiting for years for new material or shows from us, so why should we charge them? The plan is to put up video on Youtube or Vimeo or something like that, and probably put our music up on Bandcamp or Soundcloud or something. I’ll set up a mailing list that day and e-mail everyone once we have the material up as a thank you for being so patient with us and attending our last gig.

KS: What has everyone been up to since your last show?
AR: Well, as mentioned previously, life gets in the way when you’re making plans. We’re all pretty much involved in other things right now. Eric is working his ass off and finishing up his degree at Pitt. Rob is currently at Pitt as well, and working. Rachel just graduated from CCAC and is more or less working on playing music professionally as far as I can tell. Ben is teaching music at CMU and Chatham, and Michael is also working on heading to Pitt to finish up a degree. I’m a former Pitt grad myself, but I’m working at the Software Engineering Institute at CMU and I’m working on my Masters degree there as well.

KS: Is anyone in the band currently involved in other projects?
AR: Michael and Rachel play in a folky band called the Briarhoppers. Rachel also plays in an Irish band suitably named The Bastard Bearded Irishmen. Michael also plays tabla in Kukeri, and with various other musicians around the city. Eric is probably composing a masterpiece [he’s one of the greatest young composers I’ve ever met]. Ben has been playing in a project with a country singer named Brenda Jean, and has been performing at Open Mics with our very talented friend Alyssa Capozzoli that will hopefully turn into something really big. Rob plays with various friends, most notably For Greater Consciousness, and has recorded cello with a few local bands, including the black metal band Mahanaga. I’m currently involved in my own solo work (which is notably different from Kalon and more electronic/loop-based), as well as a King Crimson tribute band that will be playing at Howlers in October. I’m planning on tapping Rachel and Rob for that. I also can now work on my side projects, Ouroboros (doom metal) which involves Ben, and Country Time Lemonade (folk/bluegrass covers of pop songs) which involves Ben as well.

KS: What can fans expect from this final show?
AR: We thought about doing all kinds of fun visual stuff like we’ve done in the past, but I think we’re more committed to doing a show in which we perform to the best of our ability. People who haven’t seen us will wonder why we’re a loud rock band that plays with music stands in front of us.
They can also expect the openers, Grand Piano, to be fucking amazing. Those guys are great, and I’m very glad we’re playing our last show with them. I’ve personally always been a fan of anything Thomas Cippolone involves himself in (Life in Bed, Red Team Blue Team, etc.)

KS: What is your most memorable gig to-date?
AR: For me, I’d have to say it was probably the Three Rivers Prog Rock Fest show back in 2008. We had our friend, Rick Moslen (Boca Chica, ex-Horse or Cycle, ex-Gremlins & Butterflies/Slur, and a billion other bands) doing live visual manipulation of film we had all shot, and all wore kurtas, which made us look almost like a little cult or something, haha. Most bands either dress individually or wear concert black, or suits. We wanted to pay attention to our Eastern musical influence (especially since I’m South Asian anyway), and wear something bright instead of dark. The performance was great, and we had a marvelous time. I think there were a good 800-1000 people in the audience that day.
A few other notables would be opening for Kayo Dot (twice), and playing the CD release party for Don Caballero/Zombi/Blunderbuss back in 2006. The latter show was sold out, which was pretty incredible.

KS: What are some other local bands you’re diggin’ on lately?
AR: Oh man, this is a hard one. We’re obviously into Grand Piano, or we would not have asked them to play. I’ve personally really enjoyed Legs Like Tree Trunks, Broken Fences [their new record is great!], German Shepherd, Triggers, Zipper, Action Camp, Skinless Boneless, just about anything the Modey Lemon boys are up to [Expensive Shit, Old Head, etc.], Great Great Ants, and Elliott Sussman. I’m sure there are a ton more I’m forgetting, but that’s who I’ve seen live within the past 2-3 months and they come to mind much more quickly.

KS: If you would like your fans to take away one thing from this last performance, what would that be?
AR: Well, we’re hoping they take away copies of the final show in either video or audio form in a few weeks after we edit and post it up! But seriously, we hope they have a fun time and experience music that’s a little left of left field. We have some surprises in store.

In order to see the surprises, you’ll have to attend their final show this Saturday at Howlers in Bloomfield. The event begins at 9PM with Grand Piano, followed by a closing set from Kalon. Tickets are $5. 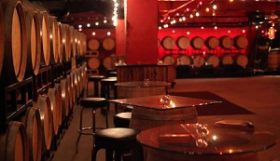 Songwriters in the Cellar

The One Hit Wonder Spaktacular

One Response to The Kalon Interview