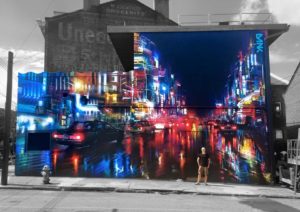 Whether you’re an avid globetrotter, an art collector, or pop culture enthusiast, chances are you’ve come across DANK.

Artist Dan Kitchener (DANK) resides in Essex, London, where he’s painted more than a dozen street murals in and around the city.

He’s curated motion designs and visual works for renowned musicians, ranging from Paul McCartney to Calvin Harris, and art displays in cultural hot spots around the world–Stockholm, Spain, and Tokyo, to name a few. 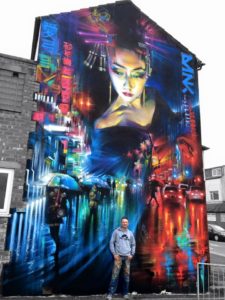 Courtesy of Ziggy Sawdust Productions, DANK dropped by the Burgh last week to paint his first-ever public art display in the States.

We had a chance to chat with the artist, who shared details of his visit, creative process, and why he chose Pittsburgh as the first U.S. city to share one of his rare, unprecedented works.

Kitchener said he thrives in new territories, and actively seeks out cities to create and infiltrate with art; hence, when he was asked to paint a mural in our city, he openly welcomed a new adventure:

“I am really drawn to areas that don’t have much street art or murals at the time … Sometimes, very popular cities become oversaturated with work, and it just becomes visual noise. I like the idea of being one of the first muralists to create work in Pittsburgh … [it] was also a place I had wanted to visit, so when the opportunity to paint the wall came up, I jumped at the chance!”

After his PGH arrival, Kitchener got a feel for the wall’s size, space, and structure; it’s usually the first step he takes before his project ideas come to fruition. 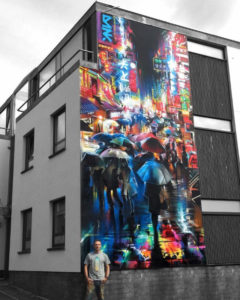 “The design was very specific to the area–to the wall, itself. I always have designs in mind before traveling to a wall to paint; but they almost always change to adapt [to] it, once I’m in the space and see the wall for real. There’s always a way of reading a wall that only shows itself once you are literally standing in front of it! I wanted the mural to have the feel of a modern city, but not be too restricted by making it location-specific. So, it has nods to the USA, but also to Europe, East Asia and Tokyo … I like this ambiguity.”

The artist hopes the mural will resonate with those who see it, speak to viewers on multiple levels, and hopefully, make them smile:

“I think people can relate to a rainy city at night, as most have been in an environment like that at some point in their lives … For me, the vibrancy, energy, and colour create a positive and beautiful image … I think these huge public art galleries have a duty to help an area, and create positive energy and positive imagery. It really can affect people’s moods subconsciously; so with this in mind, I hope it might–in some way–brighten people’s days!”

Of his time spent in Pittsburgh: Kitchener said he greatly enjoyed painting here, and looks forward to returning for future projects and collaborations. 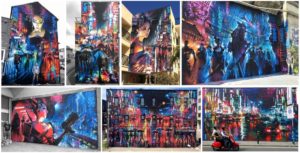 “It’s great to be in Pittsburgh! Everyone was so positive, friendly and helpful … I’ve been lucky to have met a lot of photographers and artists, and visited some great gallery spaces. [I] have some collaborations already in mind, and will definitely be coming back to Pittsburgh in the future; I loved it there!”

The finished mural, titled “New Horizons,” is now on display at the outer side wall of New Am. The bar will officially reopen to the public this Tuesday, August 30.
Be sure to stop by and check the DANK artwork out, for yourself!