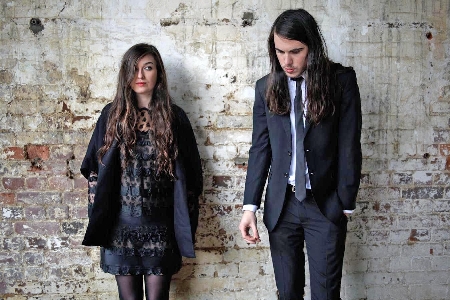 Standout indie duo Cults, whose accidental Soundcloud fame catapulted them into a successful career, are no longer shiny and new. These seasoned performers released the follow up to their 2011 self-titled debut album, Static, last fall, which was well-received by fans and critics alike. We’re especially excited to catch them this time around. They played Brillobox a few years ago while still a sleeper hit and the last time they came through it was as an opener at Stage AE, a room far too large for Madeline’s pipes. They should really shine at Mr. Smalls when they play there next weekend. We’ve got a pair of tickets to give away for you, our lovely readers.

Remember why you fell in love with Cults in the first place and listen to this jam you probably haven’t heard in a while. It’s one of our faves, and rumor has it that it’s front woman Madeline’s favorite from their debut as well.

They hit Mr. Smalls Saturday, February 15 at 8PM with Mood Rings. You can purchase tickets here or try your hand at our giveaway. We’ll contact the winner via email. You must respond within 24 hours to claim your tickets. Good luck!