After seven and a half years, the South Side EDM institution known as Z:Lounge has been sold to a new owner. Whether you’re relatively new to the scene or have been hanging out since the Zythos days, if you’ve been to Z:Lounge then you know how special of a place it is and how much it will be missed by everyone who has had the opportunity to let loose there. They’re going out with one last bang and are inviting all of their loyal patrons that have stuck by them through thick and thin to join them for the night. “An oasis of electronic music in the rock, pop and hip-hop dominated South Side, Z-Lounge has consistently kept true to its mission, never faltering.” –Keeb$ The “Anti-Ultralounge” will be hosting its finale party tomorrow, Saturday, June 30th and will feature sets from those who have been working with them over the past year. The lineup includes:

They’d also like to shout out their door guy, JP, who has done a phenomenal job of holding down the fort night after night. In order to bid the Z a proper adieu, we thought it would be nice to include some words from those who have worked there throughout the years. Special thanks to Lou, Keeb$, Kelly, Chico and Clevr for their help on this!

Dave Clevr: “I think back about how many times I’ve grabbed the giant metal “Z” to open the door and took that step up to walk through the threshold… it has to be well over 10,000 times. Each and every time I walked in there I felt comfortable, never having a negative or anxious feeling. If I did feel anxious it was from the excitement of seeing all my friends, or anticipating what new music the DJ that night was going to spin, or if I was going to play a set that people would thank me for later. Always smiling faces, familiar and new, Zythos/Z Lounge has always been a place for the open minded, the un-popular, the progressive thinkers. What tied everyone together under its roof was a healthy supply of acceptance. And with everyone adding their own positive energy over the years, Zythos/Z lounge became an incredibly powerful magnet… keeping us all coming back and continuing to attract the like-minded.
My first residency was in early 1998 with DJ Smartie on Mondays at Zythos. It did well for a Monday with between 30 and 50 people every week. The scene was much newer then and people were excited to go out and hear EDM no matter what day of the week it was. The skills you learn by playing out on a real sound system and in front of a crowd are invaluable as a beginner DJ. I am eternally grateful for the opportunity the Zythos/Z Lounge family has extended to me and continues to. Up until its last breath of life is exhaled through the heavy glass door and the Z Lounge banner is draped down looking into carson street for good, you’ll find me there laughing with my friends.”

Keeb$: “One of the first places I DJed was in the backroom of Z-Lounge when I was about 17 in 1998 for Fuzz’s pre-cursor: “Balance”. The sound system in that little room was bigger than those I see in spaces 20 times the size these days. Ahh, memories… and hearing damage.”
“I certainly can’t forget my birthday party upstairs there in the early 2000’s either. Right at the peak of the night when the place was getting packed, I leaned out the window to yell to an arriving friend. In doing so, I accidentally knocked a bottle out the window and instinctively pulled my head back inside immediately. I found out about 45 seconds later that this was assumed to have been an intentional threat towards the bouncer/security, JP, downstairs when Lou and JP came running up the stairs yellling “WHO THE FUCK THREW THAT BOTTLE?!?! SHUT IT DOWN!!!!!!” That was the end of that party and never again did I see that window open.”

Chico: “Z Lounge was a place that as an upcoming DJ you wanted to play at. It kind of validated you in this city. Let me rephrase, if you got asked to come back for a second go around, that was the validation. It’s a venue that rewarded you on your skills rather than who your friends were. I started on Tuesdays and worked my way into Saturday. In that time I gained a dysfunctional family. My fondest memories will always be JP announcing my arrival to everyone that was in the bar. It was embarrassing every time, but for some reason I looked forward to it. I’m gonna miss that old man. He’s family to me. Always will be.”

Kelly: “I have worked at 2108 east Carson for 14 years on and off. I started in 1998 when it was Zythos. Years later when it became Z Lounge I became a bartender and I never left again. I always said that Z Lounge was a raver retirement home, a place where ravers came to die. Over the years I have heard some awesome music from hundreds of deejays. I have also heard some awful music over the years. mainly because we gave new deejays a chance and I am honored to have been able to watch a lot of them become better over the years. Z Lounge was my home, the people there my family through good times and bad. I guess that’s what made it so special. It didn’t matter if you came in not knowing anyone because the chances are you would leave knowing at least a few people if not everyone. I spent a lot of time upstairs on the weekends bartending. I have seen numerous bands and tons of hip-hop artists over the years. Some of them became famous, some are still working on it and some have stopped all together. That’s the life of it. I’m going to miss being behind that beautiful bar. I’m going to miss meeting awesome people and I’m going to miss hanging out there. Saturday night when Ova screams “shrimp fried rice” for the last time, when Lou turns on the lights and JP screams “ok people” I am sure that more than a few tears will be shed. It’s an end of an era. It was a roller coaster ride for sure and it will be missed by all of us.”

Lou: “Z:Lounge has been the biggest part of my life for the past 7 1/2 years. It is a staple in the city of Pittsburgh and a destination for people who never go to the South Side. The whole concept of the place has been held out perfectly throughout the years – a nice place that people can come to for great music and good drinks with reasonable drink prices. All of the people that I have met at Z:Lounge have walked into the building as a customer that now I consider family.”

We’d like to thank the staff of Z:Lounge for providing us with many good times throughout the years. We’ll miss this South Side haven. We’ll miss people watching all the meat heads pass by as we sit comfortably tucked into our outdoor seat, and last, but not least, we’ll miss Ova – who has been pouring some of the best drinks in town for as long as we can remember, winning the City Paper‘s “Best Bartender” title in 2011, 2009, 2007 and 2006. We wish all the staff the best of luck in their future endeavors!

Faceburgh: Portraits of a City 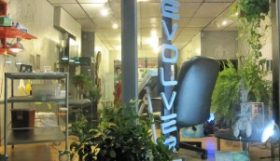