We’re back again this month for another awesome edition of Beer Run. This time, we’re premiering the latest Iron City product, IC Light Berry, an infusion of blueberry, strawberry, blackberry and raspberry packed into one premium light beer that contains 95 calories and 2.8 grams of carbs. YUM! What better food to pair with a berry-tinged beer than a delicious, fruity treat from a local bakery? This is why we recently visited ten area bakeries and gifted them each with a case of the new IC Light Berry! My mouth is watering just looking at the colorful case. Yours certainly will be by the end of this post, trust us.

The first stop on our run was La Gourmadine in Lawrenceville (pictured above). Located at 4605 Butler Street, La Gourmadine is one of Pittsburgh’s premiere French bakeries. The bakery was opened by Fabien and Lisanne Moreau, who were both born and raised in France. They originally wanted to open a French restaurant but changed their minds once they realized there were no traditional French bakeries in Pittsburgh. I recently had the opportunity to try a cake from this bakery for one of my neighbor’s birthdays and it was hands down one of the best chocolate cakes I’ve had in recent memory. I will definitely be requesting one for my birthday next spring! Be sure to also check out their variety of individual pastries, croissants, brioches, tartes, quishe and much more!

Cupcakes aren’t just for college students and kids, they’re for everyone. The trendiest pastry around, cupcakes have been popping up everywhere from fancy, red carpet events to weddings and everything in between. With locations in Lawrenceville and Oakland, Dozen Bake Shop has done a great job of transitioning ownership while still maintaining the integrity of the brand, which has undergone a bit of a redesign but still has the same spirit at heart. We recommend stopping by for one of their Sunday brunches. Their most recent one featured banana pancakes with Nutella, a personal fave of mine, as well as cupcake pairings with fresh fruit and potatoes. The Cuban sandwich on their homepage looks to die for as well! Be on the lookout for their food truck around town.

Food Glorious Food, located at 5906 Bryant Street in Highland Park, can be a bit perplexing to visit if you aren’t familiar. They were once only open one or two days a week until they sold out of pastries, but they now keep consistent Thursday-Saturday hours. When I lived in the neighborhood, I remember spending a good 30 minutes in line before I got to select what goodies they had left. A true gem of the Highland Park neighborhood and bustling Bryant Street, Food Glorious Food also offers cooking classes. The owners, Brad and Tom, also offer demonstration classes at Whole Foods in East Liberty every second Wednesday of the month. With such an obvious knack for baking and cooking as these two posses, it’s no wonder this place is such a popular destination for those seeking baked goods and cooking knowledge in Pittsburgh!

Next on our agenda was Vanilla Pastry Studio, located at 6014 Penn Circle South in East Liberty. Best known for their cupcakes, as they were voted “Pittsburgh’s Best Cupcakes” in a WPXI contest, their specialty is really wedding cakes and catering. They make everything from scratch, including their fantastic assortment of cookies, brownies, muffins, breads, whoopee pies, retro treats and much more. Did we mention they have lollis!? According to their website, “Her signature confections are soft-centered â€œLollysâ€ â€“ desserts on a stick â€“ offering such enticing flavors as salted caramel custard, white chocolate raspberry and key lime pie.” The “her” in this case, is none other than April Simpson-Gruver, a California native who has cooked and baked all over the country and formerly taught pastry arts at the Pennsylvania Culinary Institute.

Jean Marc Chatellier‘s bakery, located at 213 North Ave in Millvale makes treats about as French as the name of the bakery sounds. Known as Pittsburgh’s premiere macaron destination, they have a crazy number of flavors! From raspberry to nutella, to peanut butter & jelly and even peach, if you’ve ever wanted to try a macaron, this place is IT! They also specialize in Breton cake, or French shortbread, Hungarian nut and poppy seed rolls, mini pastries, marzipan chocolate penguins and croquembouche, custard filled cream puffs coated with caramelized sugar, arranged in a cone shape and decorated with elegant pastillage flowers and Jordan almonds. SOUNDS YUMMY!

With all this talk of ethnic baking, one can’t forget about the Jewish community of Squirrel Hill where our next bakery resides. Allegro Hearth Bakery, located at 2034 Murray Ave, offers a variety of traditional breads and pastries, as well as some treats unique to the Jewish culture, such as hamantaschen, a triangular-shaped pastry typically eaten during the holiday of Purim. Their breads are fantastic and they offer everything from challah to brioche and traditional rye and pumpernickel. They pride themselves on using quality ingredients and mix only enough dough for the next day. Their loaves are hand formed and baked on a stone hearth. Be sure to try their everyday special, raisin walnut bread, a favorite of ours!

Priory Fine Pastries, located at 528 East Ohio Street in the North Side, or more specifically, Deutschtown, is owned by the founders of The Priory Hotel and Pittsburgh’s Grand Hall at the Priory, a beautiful destination for weddings, receptions, special events and more. According to their website, “The shop opened near the end of October, 2004 and quickly became a place where local residents can come for a good cup of coffee and pastries, and businesses can go for their large orders unique, delectable pastries, cookies and cakes.” The chef’s specialty is carrot cake cupcakes, but they offer a variety of wedding cakes and other fine pastries for your next banquet or special event. Not looking for something of that scale? Be sure to pop in daily and take advantage of their specials, which include a free donut with the purchase of a large cappuccino or latte!

According to their website, Enrico Biscotti is rated one of “America’s Top Bakeries”. We can see why, from their assortment of Italian pastries, such as biscotti, macaroons and tortas to their bread making classes and cafe, Enrico Biscotti has been a staple of the Strip District neighborhood for many years. Located at 2022 Penn Avenue, this authentic Italian bakery might call the Strip its home base, but their pastries are sold elsewhere in the city. Their newest venture includes dabbling in the wine biz with Carlo’s Garage Winery, Pittsburgh’s “first urban winery”. Of all the places we visited, these folks sure look the happiest to receive a case of IC Light Mango, though we aren’t sure how well it would pair with biscotti!

Mancini’s Bakery, located at 1717 Penn Ave in the Strip District, has one of my favorite things on the planet – pepperoni bread! I grew up on bread with pepperoni in it, and if you’re from Pittsburgh, chances are you’ve encountered Mancini’s bread via a school fundraiser or something of the sort. Born out of a one-room bakery in McKees rocks and expanding to multiple locations, as well as wholesaling, Mancini’s has a proven track record of success for over the past 70 years. Other than delivering a great customer experience, we can think of only one other reason they’ve survived throughout the years – a fantastic product. We recommend their specialty, Italian twist bread!

Our last stop of the day was Colangelo’s Bakery, located at 207 21st Street in the Strip District. They offer northern Italian fare in a bistro setting, but their pastry display case is to die for. The place is run by the family team of Denise, who has over 15 years of traditional Italian culinary expertise, and Nicholas Colangelo, who has over 30 years of baking experience under his belt. Their scratch-made pizza, pasta, salads, soups, sandwiches and pastries are all freshly prepared with ingredients from other Strip District merchants. We highly recommend their tiramisu, but be sure to try their raspberry ricotta pie and assortment of foccacia.

We hope all of the bakeries on the latest Beer Run enjoy their cases of IC Light Berry. Be sure to try one the next time you’re out or pick up a case at your local distributor. Pair this refreshing beer with a fruity pastry or treat from one of the bakeries mentioned and be sure to tell us how you liked it! 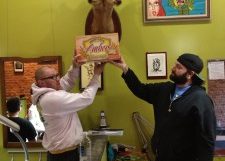 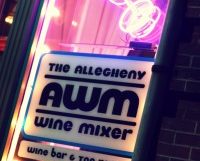 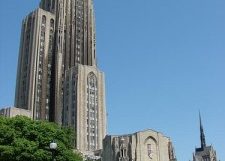