It was a doozie of a weekend, that’s fo sho! The Gallery Crawl was extra packed, and most of the free booze was gone by the time we arrived, but we still had a great time looking at all of the beautiful art. It’s really tough to pick a favorite between all of the galleries we visited. Each one contained a particularly memorable element. In Search of Something More by the lovely Stephanie Armbruster was a big hit. The space was hoppin’ every time I passed it. The jams there did not disappoint, and neither did the art. Space’s theme focused on live art and Wood St’s gallery was very projection-focused. Laurie Trok’s exhibit at Planned Parenthood was also uber impressive and contained some 3D pieces that were really top notch.

[nggallery id=61]
While we didn’t take any photos, we feel the need to mention how off the hook Terrence Parker was at Shadow Lounge! Big ups to Casey Hallas as well, who provided some awesome visuals. I really dig it when Shadow takes down the hanging art and does projections on the wall behind the stage. It makes the room appear entirely different. Me likey. We also hit up The Headbanger’s Ball, which was sponsored by our partners over at Iron City Brewery. Peep these photos to check out what you missed!
[nggallery id=62]

Last, but not least, Gang Gang Dance on Sunday was off the chain! After a disappointing Animal Collective show, we were ready to dance! Their music is very reminiscent of Animal Collective, but a bit easier to dance to. The night began with some smooth beats provided by Total Freedom, whose myspace page is titled a comical 420rainbowboi, and Nguzunguzu. Both openers posessed an R&B-tinged sound reminiscent of Onra and Nosaj Thing, only a bit more bass-heavy and globally-minded. The music didn’t stop from about quarter til 10 until the end of the show. Both openers Total Freedom and Nguzunguzu played together, and Gang Gang Dance eventually joined in on the action towards the end of the opening set. That’s when shit started to get really weird. So weird, that I found myself having flashbacks to the Animal Collective show. The weirdness factor made that show seem like a lullaby, no joke. The three groups playing together produced some type of abstract pile of noise that many people in the crowd just couldn’t wrap their brains around. I’m all about experimentation, but I really needed a beat. I kept waiting, and waiting, and then bam. It all came together one Gang Gang Dance song at a time.

Those of us who waited out the frustratingly-odd ending of the opening set were rewarded. Yes, some people took off because they were drained from the openers, and sure, we all could have used a potty break, but the set contained an impressive masterpiece of global beats, synths and unique vocal stylings. Singer Lizzi Bougatsos charmed the crowd with ethereal vocals simultaneously mixed with drumming. I was surprised at how organic the performance felt despite an abundance of technology surrounding the band members. While I’m not the biggest fan of the hippie-tinged electronic jam band trend, Gang Gang Dance is certainly a strong step in that direction. Perhaps they will shape my musical tastes in the future and enable me to be more open to that genre. Their wild, vibrant and energetic display was one of the most upbeat and engaging shows I have ever seen at Brillo Box. The height of the evening was undoubtedly during their performance of Mindkilla, which got the already amped-up crowd dancing like they just drank a case of Red Bull. Did I mention this was on a Sunday? Dayom. Check out their encore performance of Thru and Thru: 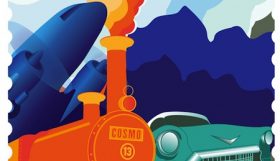 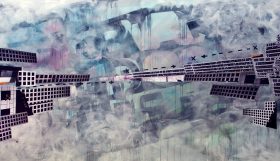 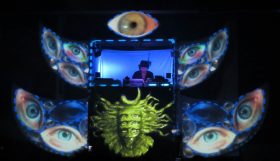