I’d set my expectations high after seeing a recent production at downtown theater company Bricolage. If you recall, we saw a fantastic play of theirs back in April, Hunter-Gatherers. I was delighted to receive another invite to one of their shows. This time, it was Midnight Radio, a series of imitation radio shows that run monthly throughout the summer. The show was broadcast online live from the stage, complete with applause sign and all. The audience was asked to applaud when prompted, but I have a feeling we would have clapped regardless. Topics ranged from sports, to flappers and gangsters, to zombies. This particular episode featured cowboys and aliens and was very War of the Worlds-esque. Different segments of the show included fake breaking news, a cooking segment, musical guest and radio dramas. It was a charming reenactment of shows produced during the early days of radio. WYEP describes the series as, “Mix one part SNL with one part Prairie Home Companion, add a pinch of Howard Stern, a dash of Pee-Wee’s Playhouse and a smidge of The Daily Show and you’ve got Midnight Radio”. Well put.

An older group in the audience who sat behind us asked my friend and I how we’d heard about the show and recommended we close our eyes for a few moments and just listen to the audio. Considering the set was constructed to mimic an actual studio, I wasn’t shocked by this recommendation. It was difficult for me to do so, however, because I was so intrigued by the way the sounds on stage were produced. It was an extremely creative display of theatrical sound design, to say the least. As someone who studied theater in high school, I can say this aspect never occurred to me as being an art, but the level of innovation at which it was presented was completely engaging and intriguing. Take, for instance, rubbing bubble wrap together and popping it periodically while another person on a different mic is fondling a box of Christmas garland in order to produce the sound a campfire would make. Genius. How about stabbing a bunch of pool noodles repeatedly with a knife to emulate cutting through a thick slab of meat or flesh? Clipboards were snapped to mimic gunshots and a stapler was opened and closed aggressively to sound like the cocking of a gun. While I’m sure this was common practice in the early days of radio, audiences rarely got to see this side of the production, which proved to be just as theatrical as the story itself.

High points of the evening included cowboy and alien sex. You might not want to see something like that, but hearing it is a whole different story. Glickpecia and Billy Joe really knew how to get down. Fake breaking news, however, was the highlight of the show in my opinion. The clever jabs ranged from utilizing a logo that strangely resembled that of Fox News’, a gay sports announcer who just loooooved the Pirates, a bimbo reporter and a Yinzer complaining about the dangers of the merry go round at Kennywood. The night ended with an obvious, yet charmingly funny advertisement for Uranus, “The best planet name ever”. Bonus points go to whoever mentioned Iron City after the cooking segment. Anyone who is from Pittsburgh would get a kick out of the show, as it successfully implemented a lot of things that people love/hate about the city. Musical guests Slim Cessna added a hip, country/rockabilly touch to the evening, playing two songs between segments. The older folks in the audience probably had no idea how trendy the duo was, but then again, most people wouldn’t. Fans of Pittsburgh darlings The Armadillos – you’d know what I’m talking about.

All in all, Midnight Radio was an enjoyable way to spend an evening escaping the heat. Bricolage’s creative and engaging approach to theater will keep its audience coming back on the reg, myself included. This show has a limited run, so hop on over to their website for information on how you can attend! 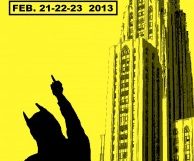