HA! And you thought you were rid of 30/30! Hellz to the naw. I’ve been meaning to reminisce on the past month of my life, but I’ve barely had time to wipe my own ass, let alone look back on the whirlwind the past month has been. Now that it’s over, and I’ve almost caught up on life, I’d like to take a moment to relive some of our favorite haps from our 30 Days and 30 Nights of balls to the walls non-stop party going. It’s time to break it down.

30/30’s Most Uncomfortable Moments
I would have to say the Mike Doughty show was the most uncomfortable experience of the month. There’s nothing like ruining your own show. That’s the last time I will be seeing your ass. Love, your former fan.
Uh Huh Her comes in a close second. As someone who has just as many gay friends as straight ones, I can say whole-heartedly that I now know how my queer friends feel at straight bars. Way outta place. I’m also not the biggest fan of PDA. I saw one too many hand-in-pocket hugs that night – oh, that and don’t forget about Alice Pieszecki! Stick to acting, babe.
Finger Eleven – Like I said in the post, you can take the Matrix out of Station Square, but you can’t take the Station Square out of the space that once occupied the Matrix. Shame.

30/30’s Favorite Venues to Deal With
We’ve been around the block a few times. We’ve had relationships with many venues in Pittsburgh whether it be through groupie status or working with them professionally. Some are easier to deal with than others. Some are much more hospitable and accommodating than others. Here are a few of my personal favorites:
The Rex – Green room. ’nuff said.
Shadow Lounge – Justin and his crew are some of the nicest cats in this city. Wayne makes some of the strongest drinks in the East End. Pizza Sola is a block away. That’s all you really need, in my opinion.
Belvedere’s – I’ve worked the door multiple times at this place now. The employees might look a little rough around the edges, but they’re just as intelligent and easy to talk to as you and I. Hell – they’re probably more with it than me considering I just killed more brain cells in a 30 day period than I have in the past five years.

30/30’s Favorites
Dirty Ball – This event was executed extremely well and rivals Hothouse as my favorite benefit for a Pgh organization. Who doesn’t love dressing up and dancing dirty? I didn’t realize how hilarious the “I’ve got x dirty balls under my belt” pin was until after the fact. I have two. Even more hilar.
Banjo Night – Grandmas, hipsters, and banjos all tucked neatly into a VFW on the North Side. How random. How charming.
The Right Now – There’s nothing like discovering a new band for the first time and being completely blown away by their live performance. This is what it’s all about for me. For every five shitty bands I take a chance on, the one fantastic band makes it worth while.
Acousticafe – Pittsburgh’s tight-knit and talented community of singer-songwriters shine at this weekly Club Cafe event. It is THE thing to do on a Monday night, and the open mic to end all Pgh open mics.
Punk Rock Karaoke – I usually get very annoyed by karaoke, but the live band aspect and genre restrictions make this night top notch. Save the Disney sing-a-longs for day care, bitches – this is PUNK RAWK!

Honorable Mentions
The following peeps are worth mentioning because they’re doing great things for the scene in Pgh. Puttin that shiz on tha map!

VIA – We touched upon their May VIA Presents edition with In Flagranti, Michael Ice and Majeure, but we didn’t really rep them hard enough. They’re doing big thangs for the electronic/vj/dj scene in Pgh. If you missed last year’s first ever VIA festival, you’d better get with the program and come this year. That way you can say, I knew about that shit before it was the cool thing to do. Oh, wait – it’s already cool.
222 Ormsby – Their economical way of operating off of nothing more than a love for live performances and party-throwing is endearing and refreshing. I really respect what these cats are doing. They were super nice, too.
Talk to Vinny – AKA the guy behind Down & Derby is no stranger to party-throwin. He just celebrated his five-year anniversary for the event last week, and was also responsible for the Sexy Sax Man bar crawl we participated in for our second-to-last night. Down & Derb was just on an episode of MTV’s Real World Las Vegas. Dude’s doin big thangs, but he chooses to call the Pgh his home. Gotta love that.

We’re excited to continue our journey of Pgh party exploration as we continue to develop NakYouOut. Our goal is to perpetuate a different image of Pittsburgh – a young, hip and intelligent city that’s on the verge of breaking out as one of the nation’s favorites. We’re here to celebrate the city for what it truly is, not what it was back in the day. As our population grows younger, we hope to foster the pride its older generations hold for the Pgh they love. We just love it for different reasons. Black & gold – young or old, this is a place we all call home for a reason. We’re here to show you why. 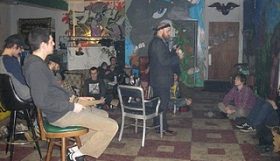 One Response to Our Favorite 30/30 Moments