The Twilight Singers and Margot and the Nuclear So and Sos must be doing something right. They packed the house at Mr. Smalls much more than I had anticipated. Both bands had a depth to their sound that only seasoned performers can produce. Lead singer Greg Dulli is also known for his work with nineties alt darlings The Afghan Whigs, but focused his efforts on his Twilight Singers project after the group disbanded in 2001. The band’s latest release, Dynamite Steps, was released on Sub Pop Records, the same label The Afghan Whigs released two records under. I’m having a difficult time placing The Twilight Singers into the Sub Pop track record. They’re described as indie rock, but I found their sound to be entirely too mainstream to ever be regarded as such. The crowd was floating somewhere around their thirties, so let’s just call it adult indie for shits and giggles.

Highlights of the evening included a shout out to Pgh’s three rivers, a violin and a plethora of Iron City. If that’s all I can come up with, you can probably guess where my head was at last night. It was certainly not in party-mode. I found the tone of the bands to be a bit too mellow to get me pumped up for anything afterward. Both bands had a Kings of Leon-ish tone at times. I can get into it, but it doesn’t get me goin. This night was certainly not about me, though, it was about the fans. They had a good time.

Tonight we’re hitting up Club Cafe for some mellow Sunday night jams courtesy of Mike Doughty. This isn’t my first rodeo, and anyone who has seen him perform before knows it’s always a politically-charged and entertaining show. Full recap tomorrow. 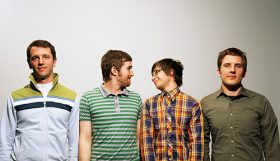