I was on a solo mission last night, and walked into Brillo Box not knowing what to expect. I thought I’d know a few people at last night’s event, but walked upstairs to a crowd of intimidating-looking folk, and immediately ordered a beverage to take the edge off. With new experiences come new friends, and I made quite a few last night. I’ve never encountered such a friendly group at a Brillo Box show. That will teach me not to judge the next time I find myself in a similar situation.

I’m pretty sure we bought out Brillo’s supply of Iron City Light. Between myself and a couple pals from the brewery, bottles were flowing left and right. I had to be careful not to overdo thangs. The theme of this month is – pace yoself! So far, so good. I attended an industrial/renegade electronic show. I knew my pal Cutups was playing, so I thought this might be more DJ-focused. Ho boy was I wrong.

Well known and respected local DJ Shawn Rudiman was there to debut his band, Analog Pleasure Model. This was the highlight of the night for me, as they were straight outta the eighties. Shawn mentioned after the show that Depeche Mode is a favorite of his, and was certainly a huge influence for his band. He did a great job at playing the part too, complete with eighties hair, sunglasses, and song introductions that went a little something like, “It’s about the things you don’t want to think about…but they may be who you are,” which woefully dove into the first verse, “Can I tell you some deep secrets…” Listen, I don’t know if I can handle deep secrets. I’m bad with secrets, let alone deep ones. I’d suggest you get a shrink. They have to keep secrets by law.

Following up Analog Pleasure Model was Prometheus Burning. I had the pleasure of meeting their singer, Nikki, who was a very nice gal. She seems to have a lot of hobbies. Hop on over to her band’s page to get the 411 on what they’re all about. They have performed at some crazy places. Underground raves, hardcore parties, fetish balls, burlesque shows – you name it. Their next gig is coming up at The Rex and I heard it involves body suspension. Nuts. They definitely fit the part, though. Crazy projections, intense industrial beats with distorted vocals, a singer with fake blood on her chin – fetish at its finest. They seemed like they’ve been around the block for a while and have a loyal Pittsburgh following. I’m sure I will encounter them again once I dive deeper into the world of industrial electronic music. Stay tuned for photos!

For now, I’m venturing into the world of party rock. It’s Cinco De Mayo, so what better place to spend it than the South Side! Luckily I’ll be steering clear of the frat boys, guidos and bimbos to seek refuge at Lava Lounge, in which the lovely musical stylings of party metal band Stone Cold Killer and pop rock outfit Music From Another Room will soothe my weary soul. Until tomorrow, muchachos! 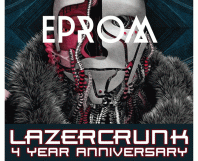 The In the Machine Age Interview