Last night was Cinco De Mayo and the partying was in full force on the South Side. I was at Lava Lounge to see two bands who I’m personal friends with, Stone Cold Killer and Music From Another Room. I’ve seen SCK many, many times, as my boo is the bass player. Come on – like duh I date someone in a band! Dating someone who’s as into live music as myself is pretty much a prerequisite in my book. That and um, other thangs. Lava was more packed than usual for a Thursday, which was probably due to the overflow of cinco libations. Speaking of, Pitt kids – what ever happened to Sombrero Man? I thought of him yesterday after seeing so many of them. No one can rock a sombrero like he can. Not even Cheech.

The more I go to Lava the more I realize how odd of a place it is to see shows. This fact was intensified by the amount of gear Music From Another Room had. It took up half the floor. Jeez guys! And I had to escort the guys back to the car four blocks away while they struggled to carry all of their gear. I didn’t help. Ha. MFAR was surprisingly good. They are all talented musicians and played well together. You could tell they were having a lot of fun and were passionate about the music. Pop punk isn’t really my cup of tea as a genre, but they are extremely tolerable compared to other bands of the genre. Had I been more drunk I would have probably bopped around a bit, or as my friends would say – run in place.

Stone Cold Killer is a party band with a lot of energy and a sweet front man. Not as sweet as the bassist, but hey – he’s taken. Nate, aka Savage Love, is the bread and butter of the band, fully playing into his role as metal god with his very fitting Gibson Flying V guitar. Not too many dudes can pull off that guitar, or a handlebar mustache, but Savage Love seems to do so with careless ease. His long, blonde flowing locks soak up the sweat rendered by 45 straight minutes of screaming songs about whiskey, broads and money. Beer in hand, pants – tight. Savage Love should have probably been born about thirty years before the eighties, but it doesn’t seem like he notices it isn’t 1978. Rounding out the band is Hans RobÃ¶tzer on guitar whose sound last night, as bassist Mick Nail would put it was, “Very British, very fuckin’ loud,” as well as the world’s tallest man, bassist Mick Nail and Party Pete on drums. Mick Nail was having a difficult time last night due to how constricting the stage was. He usually runs around like a mad man. Normally bassists look all lethargic, creepy and hunchbacked, but not Mick Nail – he’s about as out there as bassists can get. Party Pete likes to take his shirt off while drumming and make up songs about his name. Last night the band replaced the infamous TNT song by AC/DC with Party Pete as the chorus. I’m sure he’s dynamite, but I really wouldn’t know. He’s a dynamite drummer, that’s fosho. Another thing that’s fosho – this band is legit. I have never been the biggest fan of metal or AC/DC, but seeing these guys play the classics and their own originals arouses a kind of childish, giddy laughter that only they can create. They aren’t to be taken seriously. They’re here to shred your faces off, have a good time and break some shit. Rock ON.

Tonight we’re kicking off our second Friday night of 30 Days and 30 Nights with a visit to The Rex to see Glass Harp. Middle aged men – here we come!

Faceburgh: Portraits of a City 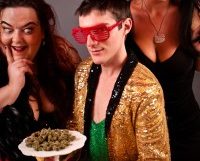